Lagos explosion: How elderly woman lost UK-based son and daughter who was to wed in six days

The cry of Amaka Okonkwo, an elderly woman, caught the attention of the crowd from several parts of Lagos who were at the scene of the explosion which occurred at Soba, a community at Abule Ado, Amuwo Odofin local government area of Lagos state on Sunday.

“Oh, Lord!!! This is unbearable. It’s too much for me!” She cried aloud as the crowd gathered. She rolled on the floor, mindless of the specks of dirt and other particles scattered around. Findings revealed that she lost three grown-up children in the unfortunate incident. To the elderly woman, all she had worked for was gone in less than a day. One of the three children was said to have just returned from London to attend the wedding ceremony of the second child scheduled for Saturday.

Like Okonkwo, some families in Soba community also lost loved ones. No one had predicted that the Sunday would not be a regular sunny day. Bodies were counted and so were damaged houses and cars. 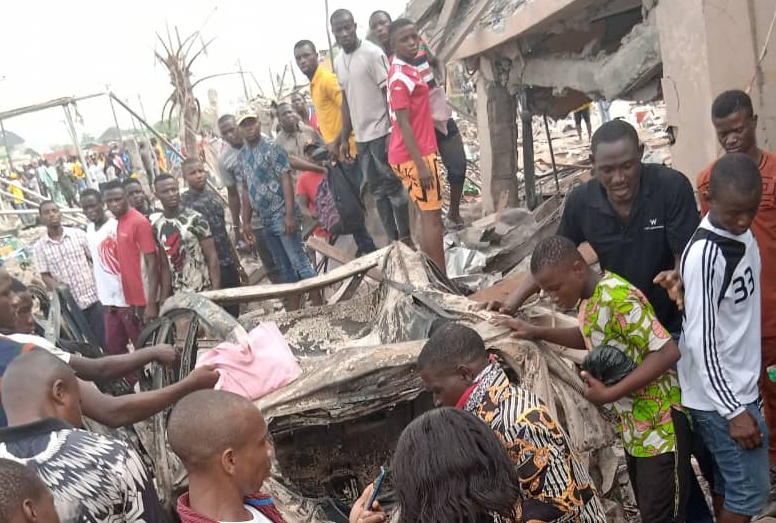 Victor Okoli, one of the residents, told reporters  about the fate of one family. While assisting in bringing out movable belongings from the collapsed building, he said it was only the elderly mother who had gone to church at the time of the incident that survived the explosion.

“Three lives were lost, a husband, wife and another relative. And that husband is the only son and the wife was pregnant. They are four in this building but their mother was in the church, so the son, his wife and nephew were inside the building. I was also in the church when I heard the sound. Everybody else was in the church,” he said.

Emeka Eze, a resident who stood dumbfounded in one of the collapsed buildings, said three people died there. 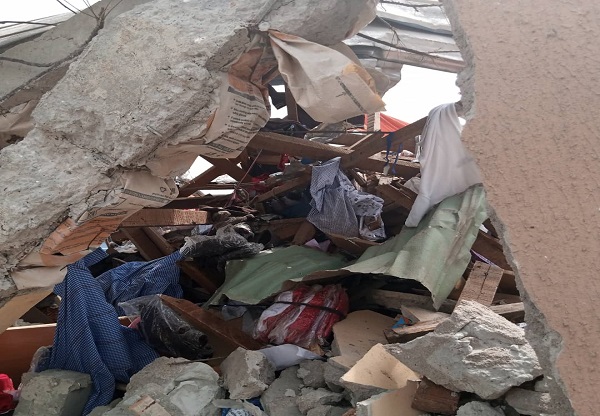 Your lives or belongings? The occupants of this place could not salvage some of their properties probably because these pillars could cave in anytime

The explosion which occurred around 9am on Sundayaffected several buildings. Although, the National Emergency Management Agency (NEMA) had said over 50 buildings were destroyed, counts done by the reporters showed that at least 80 houses were damaged. Some of the buildings were shattered, while others had their roofs in terrible condition. 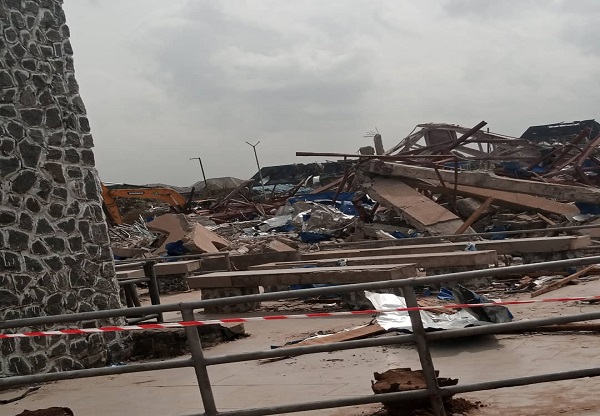 The morning after… ruins everywhere

While Bethlehem Girls College, a secondary school in the area, got some of its buildings shattered and its administrator killed, Michlom Schools, also in the area, had its roofs in a terrible condition. Like buildings, motor vehicles in the area were badly burnt while some had their parts damaged.

Speaking with the reporters, Dolapo Fashare, director-general, Lagos State Emergency Protection Agency (LASEPA) said checks would be done to identify persons who might be trapped in the collapsed buildings.

NEMA had said 15 corpses, including a family of four, were recovered from the scene as of Sunday evening. Three other persons were rescued on Monday.

DIFFERENT ACCOUNTS ON CAUSE OF EXPLOSION

Since the explosion occurred, there have been speculations as to the cause especially based on the impact seen and the sound felt in several parts of the state. Many had speculated that the explosion was caused by either pipeline vandalism or bombing. But Ibrahim Farinloye, acting coordinator, Lagos territorial office of the agency, had said it might have occurred in a factory located in the area. 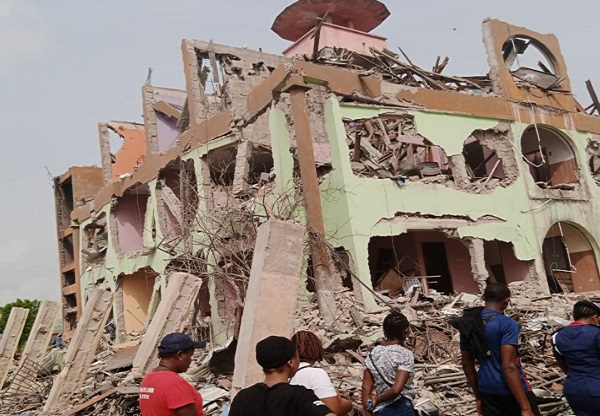 One of the destroyed buildings

A former chairman of Soba residents association who addressed journalists said the fire was caused by the pipeline in the area, which according to him, was not well placed.

“The real cause of this explosion is the pipeline. There is either a gas emission through that gas pipeline or it was not well-laid because the contractor worked on it last year. He repeated the work two times. So we had an understanding that every pipeline should be at least five to six feet deep, it should be wrapped in concrete and buried into the ground. So there is no way it will be ignited by fire,” he said. 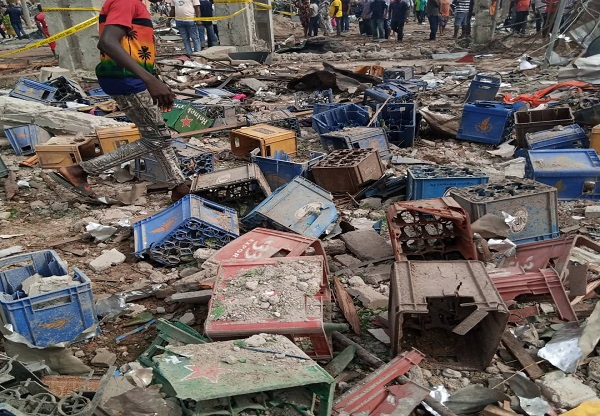 Samuel, who had resided in Soba community for 10 years, gave an account of the incident. He told the reporters that a granite truck which found it difficult to pull its way through hit a diesel pipeline, leading to the explosion.

“A truck carrying about 30 tons of granite was about to enter the street when some guys demanded money from the driver. The driver stepped down and paid them,” he said.

“After paying them, the driver tried to move the truck, but it had sunk into the muddy grounds since it rained a few days ago. As the driver was primming, the truck got on the diesel pipeline and then it burst it. The content of the pipeline filled the air and covered the school (Bethlehem Girls College). There was a guy who sold noodles around the school, so the diesel in the air caught fire from the guy’s cooking, and a blast occurred.”

Babajide Sanwo-Olu, governor of Lagos, has set up a multi-sectoral committee to investigate the cause of the explosion and give a report in two weeks. The committee is headed by Obafemi Hamzt, deputy governor, and co-chaired by Tayo Bamgbose-Martins, the state commissioner for special duties. 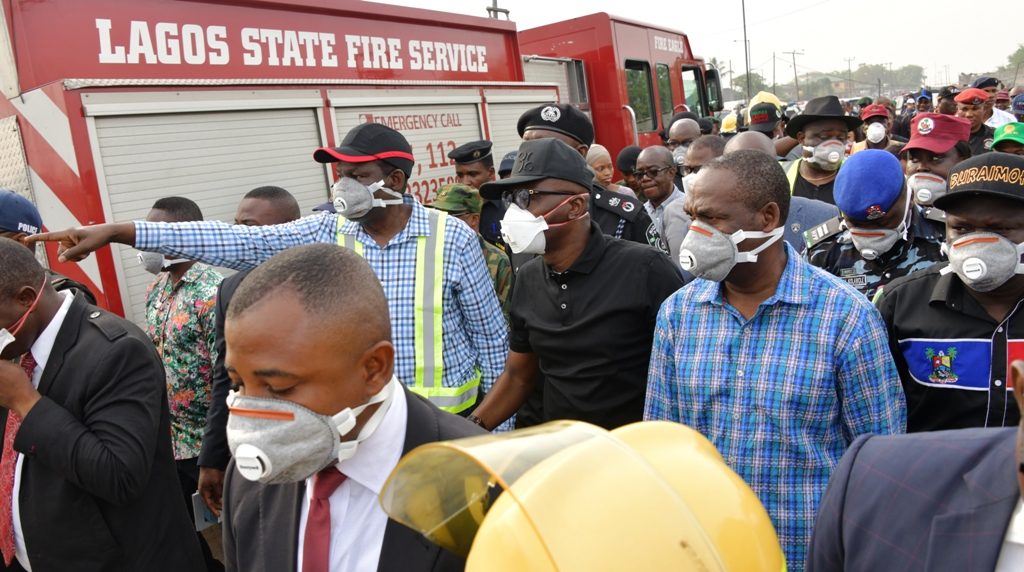 Sanwo-Olu and his cabinet members at the scene

At the scene of the incident on Monday, Sanwo-Olu said the explosion turned the community to a war zone, adding that he has never seen anything of such magnitude before.

He admitted that the state government could not single-handedly address the effect of the incident and bring immediate succour to the residents of the area. Sanwo-Olu said a N2 billion emergency fund has been established to grant relief to victims of the explosion. He said the state government will immediately put N250 million in the fund, adding that other members of the public are encouraged to donate.

WHAT HOPE DO RESIDENTS HAVE? 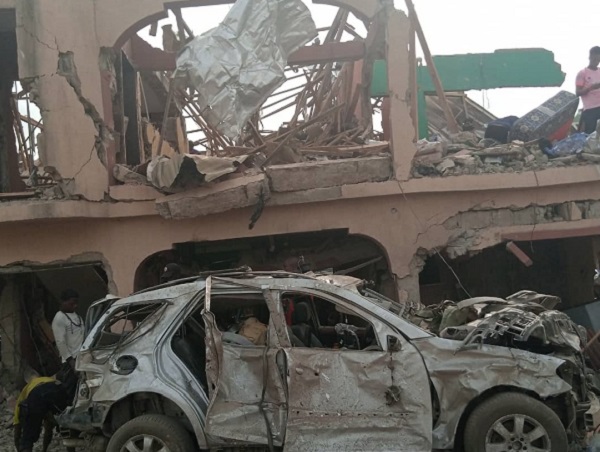 Kalu Okafor, another resident, lost only his house burglary and louvres in the incident. But he is still shocked as to the degree of loss recorded in several other places. Okafor, who has for several years, lived in Port Harcourt, capital of Rivers, an oil-rich state, said hope seems to be far from Soba residents at the moment.

“Look at that building, the man with his two sons and his wife, four of them died. I haven’t seen such thing like this before. I have lived in Port Harcourt and I have seen pipeline go off. But this one is different, I don’t know what to say about it,” he said.

When asked what the hope is for his family friend, Okoli said the only hope is for them to seek succour elsewhere as the building which sheltered them was gone.

“The hope is for them to go and look for new apartment. This house is gone, the next thing is demolition,” he said.

Residents pray that the emergency fund as announced by the governor would be well utilised to bring relief to them. For Okonkwo and other people of Soba community who lost their loved ones or shelters, hope seems to be far away at the moment, but it is expected that with time, they will move on.